Allen & Major Associates, Inc. partnered with Orion Student Housing, LLC, DeStefano Architects , Fulcrum Associates, and the Town of Durham to design and permit this re-development project that provides much sought after off-campus housing for students attending the University of New Hampshire.  The University Edge apartments completed in 2015 include 52 full amenity apartments (197 beds) and 8,800 square feet of commercial space.

The redevelopment began with three individual lots on Main Street which were consolidated into one 1.09acre lot.  The goal for the Client was to provide enough units to make the project economically viable, while the development team needed to meet the challenges of designing a redevelopment project within a highly dense and historically significant area.  This encouraged the entire project development team to incorporate Smart Growth solutions not normally seen in a traditional residential development project.

The character and charm that is so often portrayed in the idyllic portraits of New Hampshire is clearly identified by its compact downtowns and village centers surrounded by rural countryside.  There is not a more representative example of this type of settlement pattern than the Town of Durham.  With the State’s largest University housed within its borders, Durham’s densely populated downtown is centered on the intersection of Route 108 and Main Street in its Central Business District.  Just to the east of the CBD is the town’s federally registered Historic District.  The Orion property was one of only three properties in the town that was located in both districts.  In order to maintain the traditional compact settlement pattern, several new buildings were constructed while two of the existing historic structures were restored to their original character and design.  The design called for two new commercial buildings to be located along Main Street in between the two renovated structures.  It was the intent of the design team to keep the scale and rhythm of these buildings consistent in order to seamless integrate the look and feel of Main Street between the old and new.  The street front is lined with trees and traditional architectural details round out the design.  One of the larger buildings was located perpendicular to Main Street and addresses the street with a two story component.  The remainder of the structure steps up as you get further from Main Street.  A second larger building was entirely located in the rear of the site and was designed to appear smaller in scale due to the third floors being tucked under the rooflines of the buildings.  This allows for more density, while remaining perceptively smaller to the human eye.

It was important to everyone involved in the project that the traditional character of this New Hampshire community was preserved.  This was accomplished in two ways.  First was the decision to save and restore two existing homes that faced Main Street.  The structures had unfortunately, despite their prominent location, fallen into complete disrepair as a result of shear age and neglect of decades of prior owners. While the efforts to restore the buildings came at a premium cost, it was this integration of old and new that grounds the project in the district and the community.  The floors of the old structures were in such poor shape that the floors sloped by more than 8” in some locations.  At one point in the process, the Building Inspector considered condemning the structures and forcing a full demolition.  Through a calculated approach, the buildings were jacked up and placed back down on new foundation.  Every structural element was reinforced and original trim details were replicated, where they couldn’t be reused.

The second effort was to embrace the colonial essence of Durham’s Historic District.  Taking cues from the surrounding neighborhood, elements such as nested gables, dog-house dormers and decorative trim were incorporated into new structures that had the appropriate size, scale, mass and features that would make the project look and feel as though it had always been.  The buildings were oriented on the site to provide a streetscape that reflects the traditional character of downtown Durham, while creating an interior landscaped courtyard which provides pedestrian access to all the buildings.

Principal #3 – Incorporate a mix of uses

The project is located in both the Town of Durham’s Historic District and the Central Business District. In order to incorporate a mix of uses the project includes a 3-story, mixed-use building which is made up of a 2-story commercial suite in the front and multi-family residential to the back.  Two of the other new buildings constructed along Main Street were also designed for commercial uses.

Principal #5 – Choice in safety and transportation

The project is designed to promote multi-modal transportation. Walkability was the primary focus of the project and includes many attributes of a walkable community, including a mix of uses, street connections and pedestrian links.  The design and placement of the buildings allows for density as well as easy accessibility to any destination within town.Additional design considerations included covered bike storage areas and bike racks and widening the existing sidewalk along the entire frontage of Main Street to 8 feet to make room for multiple pedestrians.  Despite accommodating 197 beds, the site only has 4 parking spaces, reserved for short-term loading and unloading purposes.

In order to protect the environmental quality of the site and surrounding areas, Best Management Practices (BMPs) were utilized in the design. These BMPs were landscape architectural features that were also used as a mitigation solution.

Rain gardens were utilized on the townhouses along the street front as a means to esthetically attenuate stormwater flows from the roof areas.  Roof drains were utilized on the large building in the back which drain to a subsurface infiltration system.  The largest and most effective BMP was the use of permeable pavers and filtering courses to provide both water quality treatment and stormwater recharge.  The pavers were laid in a herringbone pattern in different colors to differentiate the walkways from the drive aisle.

Does this project demonstrate Social Responsibility and/or creative approaches to collaboration and cooperation?

Work with the local land use boards, the Historic District Commission, and neighbors took two years of collaboration and consideration but resulted in unanimous approvals from all.  The design team began the process by working with the Durham Historic District Commission to determine our approach to the restoration, and rehabilitation of the existing structures including approval of colors and materials.  Multiple meetings were held with the Planning Board to discuss approaches that would satisfy the Town’s Master Plan and yet meet the density and financial goals of the client.

What principals/elements of Sustainability or Green Building does this project incorporate?

The town of Durham is at the forefront of the sustainable design efforts in New Hampshire.  In addition to being an early adopter of the 2012 International Energy Conservation Code, while the rest of the state is still on the 2009 Edition, Durham also considers itself to be in climate zone 6, which actually starts north of Concord.   The design team worked with the town’s energy conservation committee to explore sustainable design options.  In addition, to designing a building envelope that exceeded the stringent requirements of the town, LED lighting and Energy Star appliances were used throughout. Each residential unit is separately metered for water and electric use so that environmentally sensitive students can be mindful of their individual consumption and impact.

What impact has this project had on the social, economic and/or environmental fabric of the community?

The project provides much needed student housing within the proximity of the University and downtown Durham.  Before the project, students who did not live in dorms were often forced to live in surrounding towns and commute to classes because of the lack of available off-campus housing. The demand was so high in fact, that they pre-leased the entire University Edge development for the fall 2015 Semester in less than 36 hours and several students camped out overnight in order to reserve their spot in line.

What makes this project stand out?

We feel this project is a working example of compact design, highlighted by the mixing of residential and commercial uses.  The project promotes the most affordable form of transportation, especially for a college town, walkability.  The design embraces the character and Colonial history of the community it inhabits. Finally, density by design is really about the solutions to development with the least adverse effect, this project is representative of what is possible. 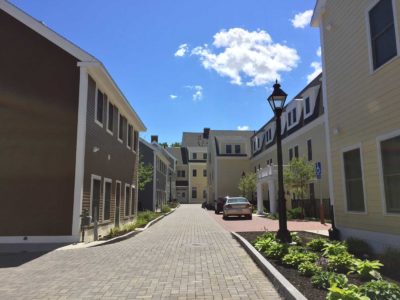 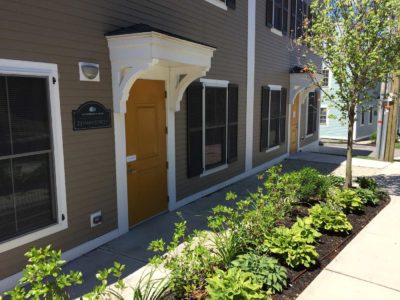 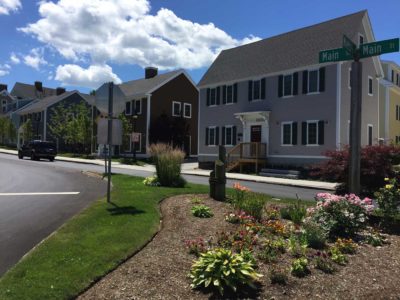 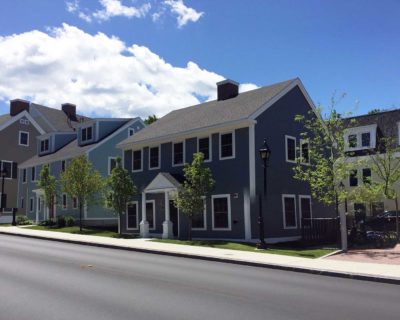 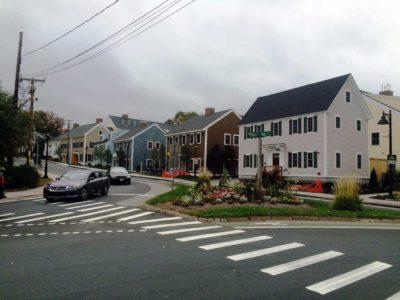